On February 25th, 2012, Greg Merritt was a 46-year-old who considered himself in good shape. He had recently returned to a healthy routine, losing about 30 pounds. However, that morning he awoke with what he thought was heartburn. Greg mentioned it to his wife, who immediately expressed concern. She knew it wasn’t normal for her husband to have heartburn and suggested they make a trip to the emergency room. They got in the car and made their way from Brighton, MI, toward Michigan Medicine.

They had just passed North Territorial Road on US-23, about 8 miles from the hospital when Greg experienced sudden cardiac arrest. His wife was faced with making a split-second decision. Should she pull over and attempt CPR? Or continue driving as fast as she could, hoping to make it to the hospital on time? She chose the latter, and minutes later, she pulled up at the entrance of the ER.

Upon arrival, Greg was pulled from the car and the care team at Michigan Medicine took immediate action. However, they were not immediately successful. After some time, the staff asked Greg’s wife whether she wanted them to continue the effort to revive him. She did, and so they continued. After around 30 minutes, they finally achieved rhythm again. Greg was transferred to the cath lab, where he had two stents placed. He then spent 4 nights in the cardiac ICU under medical hypothermia. After being down for so long, Greg’s providers and family were unsure about what kind of damage would have been done, both to his heart and to his brain. Fortunately, there was no damage to either, and Greg was eventually released from the hospital with a referral to cardiac rehab. 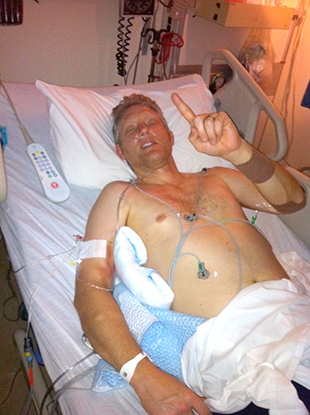 Greg was faced with adjusting to his new normal. He knew he had a family, and now personal, history of heart disease and had to grow accustomed to the idea of being on daily medications for the rest of his life. He was scared of the potential of experiencing a second cardiac event. After a couple of months of recovering from the effects of the chest compressions he had undergone, Greg enrolled in a cardiac rehab program.

Greg says that his experience in cardiac rehab was important for several reasons. “Maybe most importantly, it was a sense of true relief that I could do this. I could exercise again and not feel afraid that I was actually going to have another incident,” he explained. It gave him more confidence.

While Greg was beginning his journey in cardiac rehab, Michigan Medicine was starting a patient-centered care group in which a team of patients were asked to give feedback on their experience in cardiac rehab care and make suggestions for ways the treatment could be improved. Greg was invited by the program director to join the group and he did. The team of patients expressed a desire for more connection with fellow patients and an opportunity for them to share their own stories and goals for cardiac rehab with each other. They were also interested in hearing the stories of others who had gone through cardiac rehab before them.

As a result, the site cardiac rehab orientation shifted from an opportunity for frightened patients fill out paperwork alongside each other, to an opportunity to learn from a past patient and truly connect with one another. A cardiac rehab graduate met with each orientation group, shared their own story, and then gave the patients a tour of the gym and some ideas of what to expect from their experience.  Greg says that this made a very important distinction. “Yes, we need clinicians to help us understand what happened to us, but we also need people like ourselves, who have actually been on the other side, and are thriving and surviving with heart disease,” Greg explained.  “To see that there are possibilities. That what’s still left in one's life can be quality, as opposed to just quantity.” The change was profound.

When presented with the opportunity to join BMC2’s Patient Advisory Council, Greg saw it as an opportunity to grow partnerships across a state model that looks at quality improvement. He asked himself in what way a group of patients might be helpful in thinking about the questions that are being asked to improve care and the ways in which hospitals and health systems are utilizing the data they collect. How patient perspectives might shift care or add to innovation.

“For patients, the questions might be different. How do we have better conversations with our clinical staff? How do we have more shared decision making, so that it doesn't feel like medical paternalism and that we just go in and are being told what to do?” Greg explains. He stresses the desire for patients to have a real partnership with their clinical staff and an opportunity to say what’s less important to me what's more important to me as a patient.

Greg is aware that in emergent situations, like his was, patients aren’t always able to give this input but appreciates the opportunity his wife was given to make some decision about his care when she was asked if she would like the team to continue resuscitation. “I want to thank the staff at the emergency room. It wasn't just thanking them for saving my life but also thinking to have that kind of conversation with families. It matters so much.”

Greg is hopeful that BMC2’s Patient Advisory Council is an opportunity for the team to represent the thousands and thousands of patients in Michigan who are faced with having heart procedures. He appreciates that BMC2 providers seem to be genuinely curious and interested in hearing from patients from different backgrounds and believes that, by listening to patients from various walks of life, BMC2 has an opportunity to live from the patients’ lived experiences and respective expertise, connecting with them in authentic ways and asking new questions. An opportunity to look at the whole person. An opportunity to build community.